It was a dream. A dream to change an industry, an aspiration to change the experience of an entire section of connoisseurs and enthusiasts, a vision to step up the existing setup of the luxury watch market in Bangladesh. And thus started Mohammad and Sons- Country’s first ever luxury watch boutique. Now in 2021, two and a half years later, the dream has now become the reality, the aspiration is now an example and the vision is now the new trendsetter. The cocoon has become a beautiful butterfly! Mohammad and Sons is now the most sought after and trusted destination for luxury watches in the country.

Now it was time for them to seal their signature on the industry with something unprecedented in the context of Bangladesh and what better could be as an occasion than the 50th year of Independence. The ever-relentless team of Mohammad and Sons came up with the brilliant idea to launch a watch commemorating the 50th Anniversary of Independence. The watch was to be iconic in its own right and in its design. It was to be 50 pcs only and had to be a Bangladesh only edition. Since it would be a Bangladesh edition only, it had to represent the Bengali nationality. As a commemoration of independence, the watch was to represent the pride of the nation- The National Flag! Everything had to be special and top of the line signifying the greatness of the occasion. As brilliant as the idea was, it was not easy. Finding the right watch, finding the right brand, pursuing them to manufacture only 50 of those watches and make them Bangladesh edition only was not a day’s work. It was the perfect task for the talented team of Mohammad and Sons and they stepped up to it. 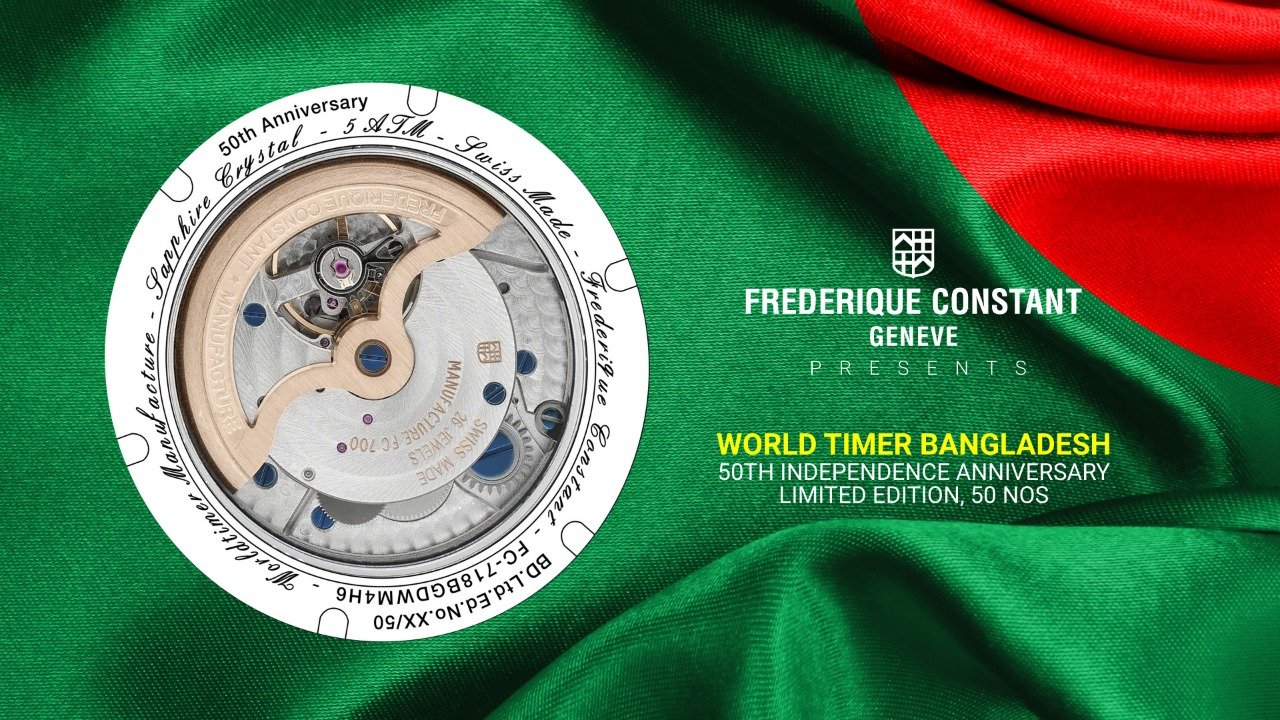 It was Frederique Constant- one of the leading Swiss luxury watch brand who came ahead and embraced the idea gladly. They agreed to fulfil the requirement and also helped out by suggesting the perfect watch for the occasion- The Worldtimer! A watch iconic in its own right and represents the brand like none other. It was the prefect watch in-terms of design and price. Now it was time to finalise the design of the watch. The combination of Mohammad and Sons and Frederique Constant did a fantastic job again.

The 42 mm watch case has a green dial matching the colour of the Flag’s body. Upper half of the day/night circle was to be coloured red representing the red circle which is placed at the centre of the flag. On top of that ‘the Dhaka’ at 3 o’clock was decided to be written in Bangla as ‘ঢাকা’ to make it even more special. But the team was not satisfied. They wanted to make the watch even more specific to the occasion. It was time to move to the back of the watch. The watch case contains writing showing ‘BD. Ltd. Ed. No. XX/50’. At the bottom it also shows the ‘50th Anniversary’. As a cherry on top one can see the beautiful Swiss made manufacture in-house movement FC-718 through the sapphire case back. The movement comes with 38 hour power reserve, 26 jewel, skeletonized rotor, Geneva stripes and perlage. The design was now complete and the execution set in line. It was now time to spread the word among the enthusiasts and connoisseurs. It was time for them to claim the credit to launch the first ever Swiss made ‘country limited edition’ luxury watch in Bangladesh. They did it so well that history was made! Yes, they did it so very well that all 50 pcs were sold within two days of announcement! This was a beautiful occasion. The independence anniversary was commemorated in a very unique way. Mohammad and Sons takes this opportunity to thank it’s patrons for this immense support and enthusiasm. This history making would never be possible without their spirited support and patriotism. Mohammad and Sons has done a fantastic job by breaking the barrier and they have paved the way for more commemorative timepieces. The Frederique Constant Worldtimer Bangladesh Limited Edition was a top-notch luxury watch at a top-notch price. Is it too much to ask the team of Mohammad and Sons to come up with a more affordable commemorative timepiece? You never know, they might as well do that. We wish them all the very best with their future endeavour!!